A simple productivity tool for the finance business partner

A simple productivity tool for the finance business partner 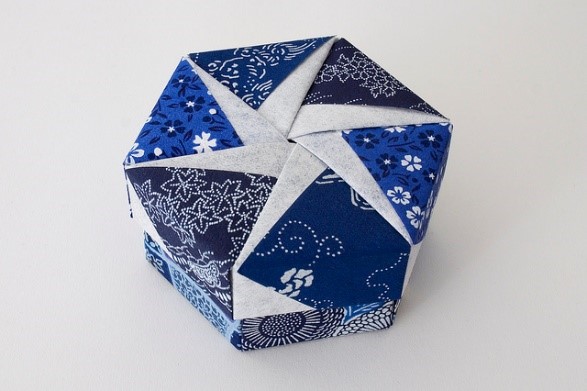 As finance business partners we all tend to be pretty busy and sometimes it can feel that there’s simply not enough hours in the day to get all the work done however some people have found a tool that helps them get more done in their time. It’s called a timebox.

I was introduced to ‘Timeboxing’ about 10 years ago by a seasoned CFO who asked his direct reports to complete a weekly timebox so we could review each other’s as a team (even the CFO’s) at our Tuesday meetings. To this day I hold it up as one of the key elements in accelerating my productivity allowing me to accomplish more in the same or less time as my peers ever since then.

Curious? I’ll introduce the timebox with a story.

Back in the early 1900s the famous American industrialist Charles Schwab was approached by a gentleman known as Ivy Lee.

He met Schwab at his steelworks office and said “I believe we’ve an idea that can dramatically improve increase your business beyond where it is.”

Schwab said to him “we already know what it is we should be doing but if you can show us a better way of getting it done we’ll listen to you and pay you anything within reason.”

He paused as Schwab reached into his mahogany desk draw to pull out a single sheet of writing paper.

Ivy Lee continued, “and what I’d like you to do Mr Schwab is to list out the six most important things you have to do tomorrow.”

Schwab did as requested, once completed, Lee added “Now first thing tomorrow morning I want you to take out that list and you’ll have them numbered in priorities, priority A, B, C, D, E ,F or 1,2,3,4,5,6. I want you to work on number one and don’t go to number two until you complete number one”.

Ivy Lee then suggested, “This is my idea that will improve your productivity, now you try it for sixty days then send me a cheque for whatever you think the idea is worth”.

Sixty days later Ivy Lee received a letter from Schwab stating it had been the best lesson he’d ever learned, “from a business point of view,” and enclosed a cheque equivalent to half a million dollars in today’s money.

The timebox is an evolution of this story. It’s a list-based method of aligning weekly tasks with our team’s goals and our personal responsibilities. There are four quadrants formed from two columns “This Week” and “Next Week” and of two rows “Urgent” and “Important.” 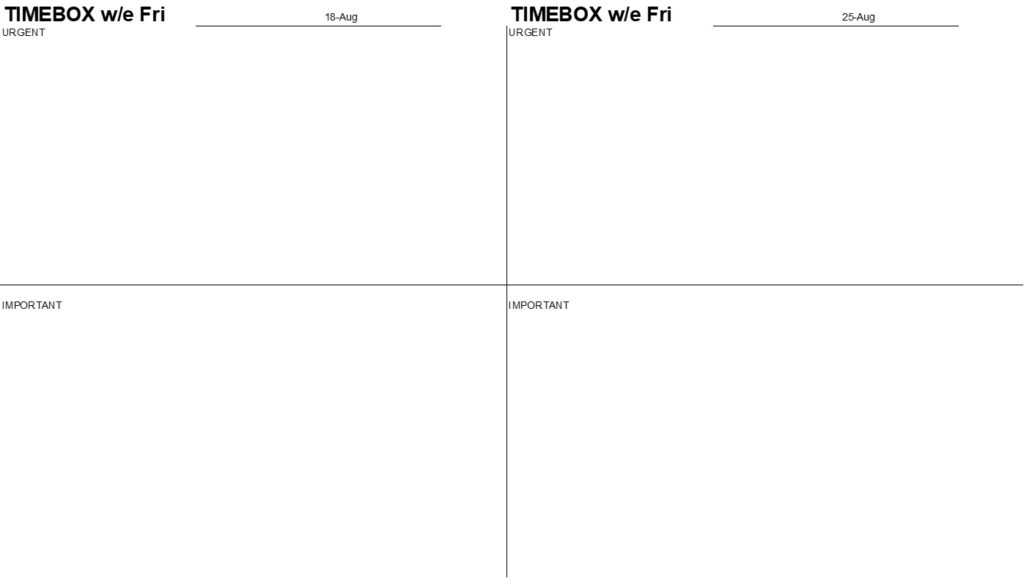 These sections provide order and help you to organise your priorities so that your time is spent on activities directed at your most productive outcomes, those that will move you towards your overarching goals. Ultimately, like Schwab you are best placed to understand what to start with, so you begin by writing down the most urgent and important things you need to do this week and next

At the start of the week you should have no more than five activities in each quadrant (so each quadrant is half-full. Some may take longer than others and given we’re dealing with a two week period there’ll be more stuff that comes in, like fire-drills & last minute requests, that we don’t yet know about at the start of the week, so to be realistic we need to allow room for that. All-in-all that means at most you’ll have 20 activities in one week (that’s quite a lot, for a 5 days week that’s 100 activities, so by the end of the year that’s the bones of 4k to 5k activities completed and tracked (which make it easier to remember what you’ve delivered ahead of any performance reviews).

And as most of us have managers or staff, it’s also a visual way to talk about our workloads, progress and challenges. It also allows managers to help staff or team members to pick up the slack as tasks can be reprioritized where individuals do not enough capacity in their timebox to stand a good chance of being successful that week.

Some finance business partners use a notepad for their timebox, personally I prefer to use an Excel spreadsheet which allows me to more easily re-order activities week-over-week and I’ve adopted a colour scheme such as shading those in green when they’re completed (my favourite bit). I use amber for currently working on, red for struggling to complete and blank for haven’t started.

It’s nice because you can, at a glance, gain a rapid understanding of how your week is progressing. Others who I’ve encouraged to utilise this tool have told me they gain a great sense of satisfaction getting to the end of the week and having their “this week’s” quadrants full of green.

Ordering between urgent and important?

Ordering time between the definitions of what is ‘urgent’ and ‘important’ takes a bit of getting used to. Urgent activities require immediate attention, such as: crises, pressing problems, firefighting and other deadlines. The pressure for these is typically external to you, the activities are often tightly linked to the accomplishment of someone else’s goal. Not dealing with these issues will cause immediate consequences. However to be truly urgent they must be aligned with achieving others’ goals with the consequence that you achieve your goals. For example: Let’s say you’ve a deadline in two days for a report you send to partners. This then goes into the urgent category.

On the other hand important outcomes are driven by you. We must also create time to focus on important things before they become urgent. This might involve relationship building, proactively meeting stakeholders, planning ahead, catch-up calls, training courses, etc… . Most of the time ‘important’ is mostly about getting ahead of the game by doing things earlier.

Here’s an example of some old time boxes at the start, mid- and end of the week.

Tracking our productivity in this way is also a great learning tool. At the end of the week you can ask yourself about what you prioritised well and could have done better so you can roll your learning into next week. You can also prepare next week’s time box by the end of the Friday before the coming week so you know what you’re supposed to be doing when you set foot in the office on Monday.

Also by including a next week, you can see what’s coming up, so your subconscious is already working on it giving you a jumpstart on the following week. You can also see ahead whether next week might already be looking challenging allowing you to reset expectations with any partners in advance.

Whilst some people might argue that the timebox is a glorified “to do” list it definitely has its roots in the story above and has since been modified to provide the necessary order and capacity to effectively execute on a person’s goals during a given week.  And if it works for you and you find your productivity becomes better, no need to send me a cheque for $500k, but I’d appreciate if you could share this approach with others so they too can benefit.

So what’s your favourite productivity tool that works for you? Let’s all contribute to make this another resource for other aspiring finance business partners so please like or add your comments below.